Nikki Bharwani of the green grocer

MANILA, Philippines – It was a second shot at life that eventually brought to existence one of the most successful and innovative online business ventures in the country to date.

“The business came about from a need to start eating healthier. I was diagnosed with ovarian cancer in 2010 and underwent two surgeries and six cycles of chemo. Naturally when you are faced with a potentially fatal disease like that, you want to make drastic changes in order to live out your second shot at life better and longer,” Bharwani said.

By the time she learned of her health setback, Bharwani was working in TV commercial production which she said was quite stressful due to its late night shoots and unpredictable schedules.

Eating healthy also did not come easy as she often found herself frustrated buying vegetables in supermarkets that were half wilting and a day or two away from being thrown in the trash.

“I decided I wanted to step away from production and do something more meaningful and earnest, more grass-roots, something less stressful. My mom was into vegetable trading, so I had some knowledge on procuring fresh produce straight from the source. I also needed to eat healthier, and at this time I was already doing some research on vegetables in supermarkets and wasn’t convinced they were as fresh as I wanted them to be. 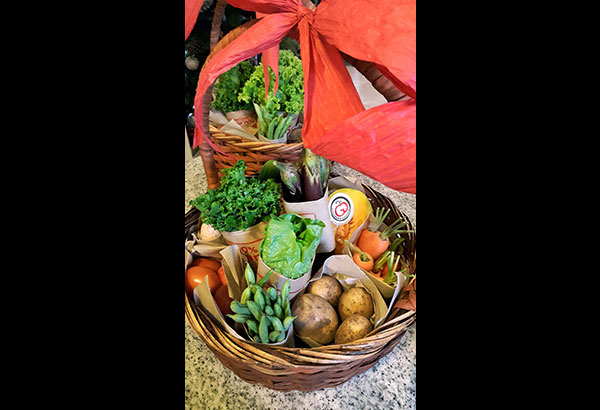 I wanted to buy my vegetables directly, so I started offering gulay to friends in order to meet the minimum purchase. More people got interested to order, I then took the next step and set up a website to post the veggies list each week. From there, The Green Grocer was born,” she said.

Bharwani started The Green Grocer with an initial capital of P3,500 to buy the initial vegetable orders. She created and promoted the website herself.

It took half a year after the business kicked off.  This was  before she began venturing into organic products.

“Now mind you, I have not even heard of going organic at this point. It was six months after starting the business that I got a call from an organic farmer in Bukidnon who ultimately opened my eyes and made me realize that eating fresh was not enough. You eat veggies to be healthy, but we forget to ask how they are grown,” she said.

The Green Grocer then began tying up with organic farmers from Benguet, Tagaytay, Pangasinan, Negros, Bukidnon, Laguna, and Batangas to source products based on the orders of its customers.

“By being able to connect the organic farms to consumers, we are helping the industry grow in that sense. We play a role in marketing and educating the public on the importance of going organic, that it isn’t just a fad, and why we should care about sustainability in the production of our food. Often farmers don’t get to make the case for the produce, they’re busy farming,” Bharwani said.

“If we create a higher demand for organic produce, more farmers will be encouraged to grow them, increasing supply and ultimately making it more affordable for the general public to patronize it. The goal for organic in the country really is that it becomes the mainstream option, without having to break the bank just to buy a head of broccoli,” she added.

Starting out initially with just several orders, the business has grown to making about 75 to 100 deliveries per week.

The Green Grocer has also partnered with several small restaurants to supply their organic requirements.

“We are now past five years strong and business is steady. We are expanding routes, taking in more farms, and offering more products. We have a strong customer base who choose to order from us not just for the quality of our products but more importantly for our service,” Bharwani said.

Bharwani plans to continue the expansion of the delivery business as well as serve more areas, particularly off-route locations, in the coming years.

For the coming holiday season, The Green Grocer is offering Christmas deals that put together its bestsellers in different unique packages to encourage people to give their friends and loved ones the gift of health and wellness.

“Home delivery of groceries is still a new concept in Manila. We cater to households who are comfortable with entrusting their market needs to us so that ultimately they can cut down grocery runs and spend those extra hours for more important errands, with family or that elusive me time,” she said.

“The Green Grocer was very hard work, lots of sleepless nights, some tears, but the little milestones were incredibly fulfilling. To see something grow from nothing was worth all the sacrifice,” Bharwani added.